No one likes downtime. It is stressful for managers, operations, and developers. Downtime is frustrating and confusing for users of a site, whether or not the “down for maintenance” page is live. Most of the popular deployment strategies for ASP.NET apps hosted in IIS do not even try to deploy without downtime. Any change to Web.config or .dll files on a live site can cause significant downtime (I’ve seen 5-10 minutes for large apps). There is a better way. It is possible to achieve zero downtime with the “blue green deployment” strategy in IIS using Application Request Routing, and URL Rewrite. Let’s get started.

The general idea of “blue green deployment” is that there is an entry point (load balancer) that routes requests to a site that is up. An application is deployed to a site that is down, that application is warmed up, then the entry point is notified to route new requests to the newly warmed up site instead of the old one. The entry point needs to be able to make the switch with no hiccups, no lost connections, low CPU/memory overhead, and definitely without any perceived downtime by end users. Application Request Routing can act as that load balancing entry point for us.

Start with a basic static site called alwaysup. Keep in mind that this site could be any IIS hosted application (ASP.NET, HttpPlatformHandler, iisnode, PHP, etc). A static site will be enough for this example. There will need to be two instances of alwaysup in IIS, so duplicate the folder that alwaysup lives in to create /alwaysup-green and /alwaysup-blue. The application files are simple. Just some index.html files to indicate which application is being hit.

Create corresponding IIS sites for each application and name them alwaysup-green and alwaysup-blue. These sites need to be bound to a unique port that is not port 80, like 8001 and 8002.

This is the complete configuration for the alwaysup-blue and alwaysup-green sites. 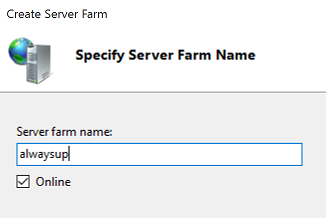 Next add a server for each host name binding of the alwaysup-green:8001 and alwaysup-blue:8002 sites. 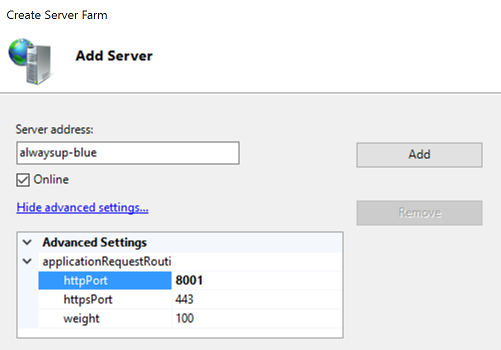 After creating the servers, IIS will ask prompt to create a URL rewrite rule to route all incoming requests to this server farm automatically. Select “No” because a rule will be created later manually with the URL Rewrite module.

Next add some health checks to the server farm. This is how Application Request Routing will know which site is “up” to route requests to. A simple way to do this is to add an up.html file in the root of alwaysup-blue and alwaysup-green with the text “up” in one, and “down” in the other.

Then add a health check to the alwaysup Server Farm that makes sure the response received from /up.html contains the text “up”. Set the polling interval to be quick so that when changes are made to the health check files very little wait time is required for the health checks to fail or pass. Notice also that the alwaysup HOSTS entry is used here. 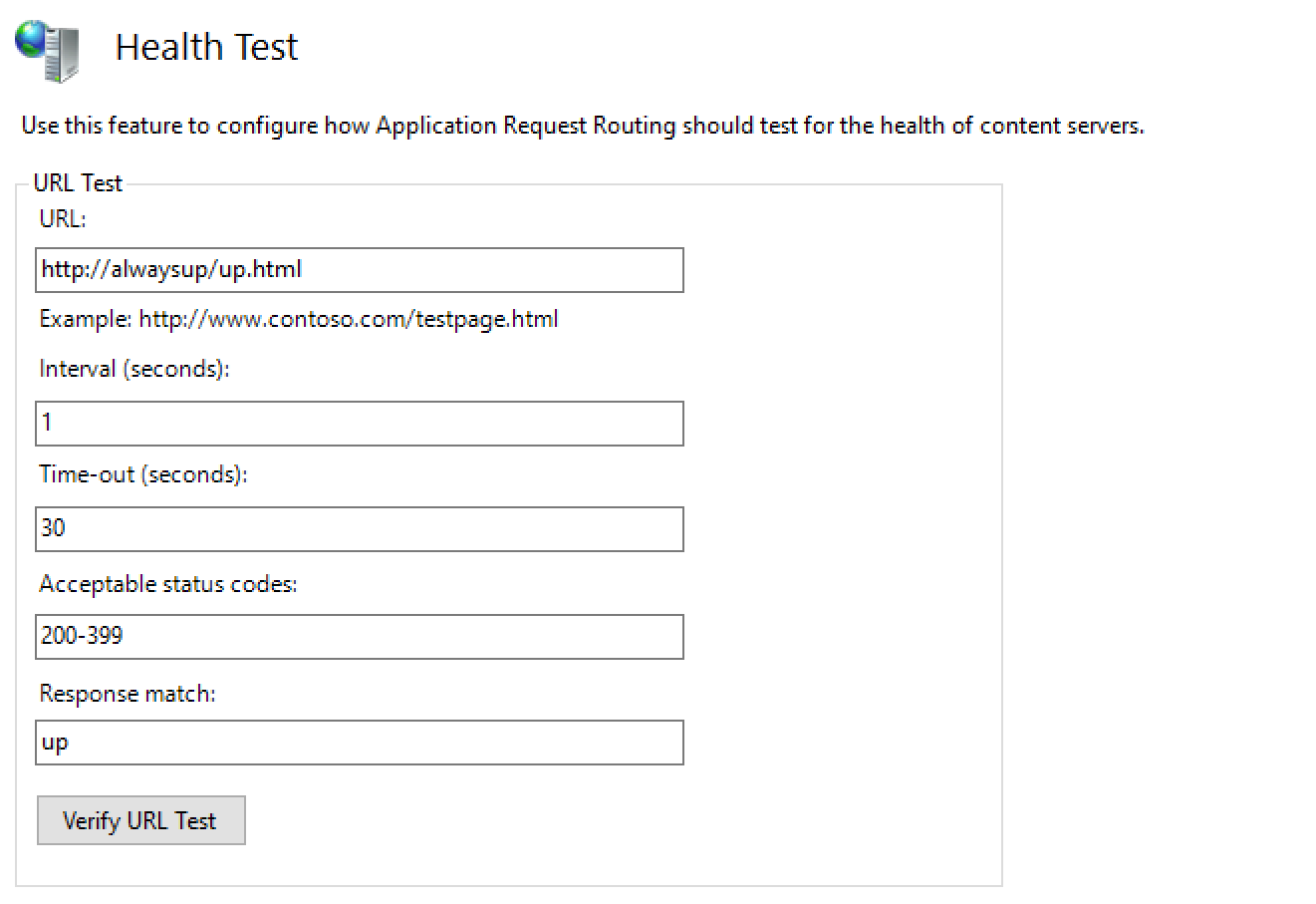 This is the complete configuration for the alwaysup Server Farm.

Now route the actual traffic to our Server Farm alwaysup. To do this use the URL Rewrite module in IIS. Requests will be made on host name alwaysup, so add a URL Rewrite rule to match on {HTTP_HOST} alwaysup on port 80. Route this traffic to the alwaysup Server Farm. One thing to note is that IIS needs at least one site listening on port 80 for our URL Rewrite to work.

Test everything done so far by making a request to http://alwaysup/. 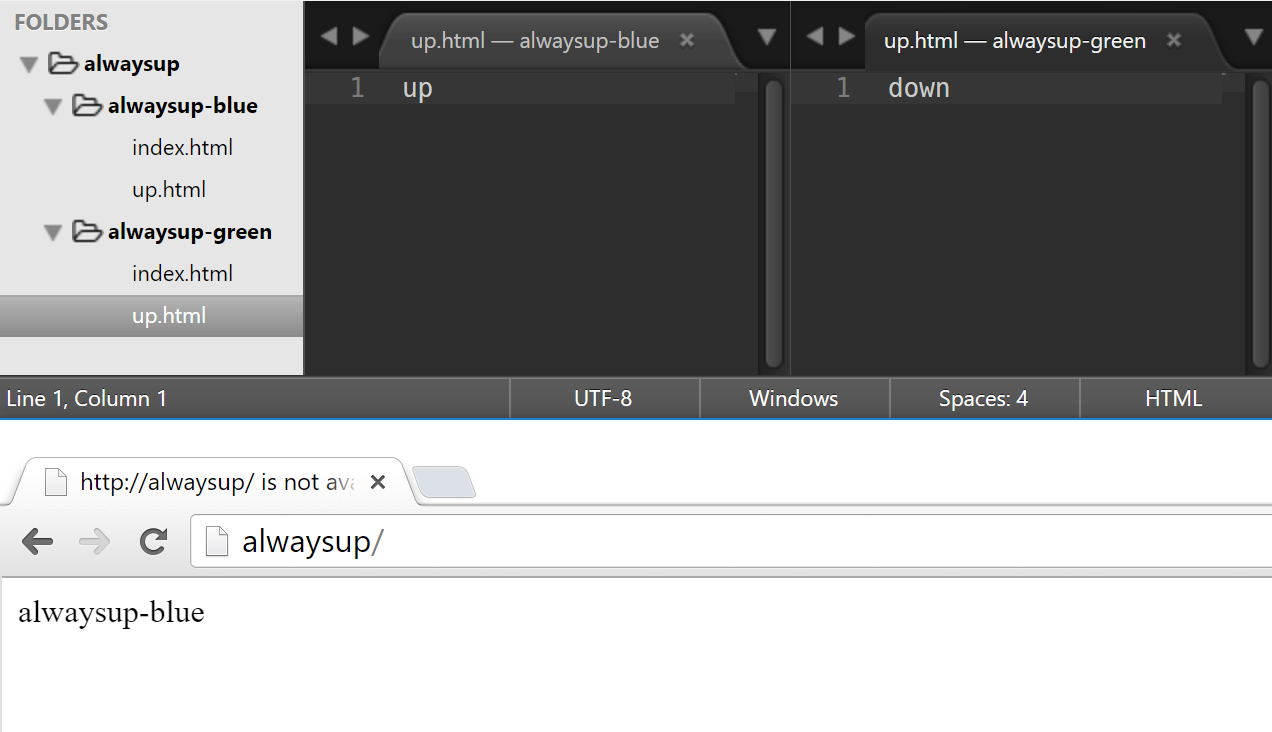 Make one of the sites fail the health test and the other pass and see the site content change. 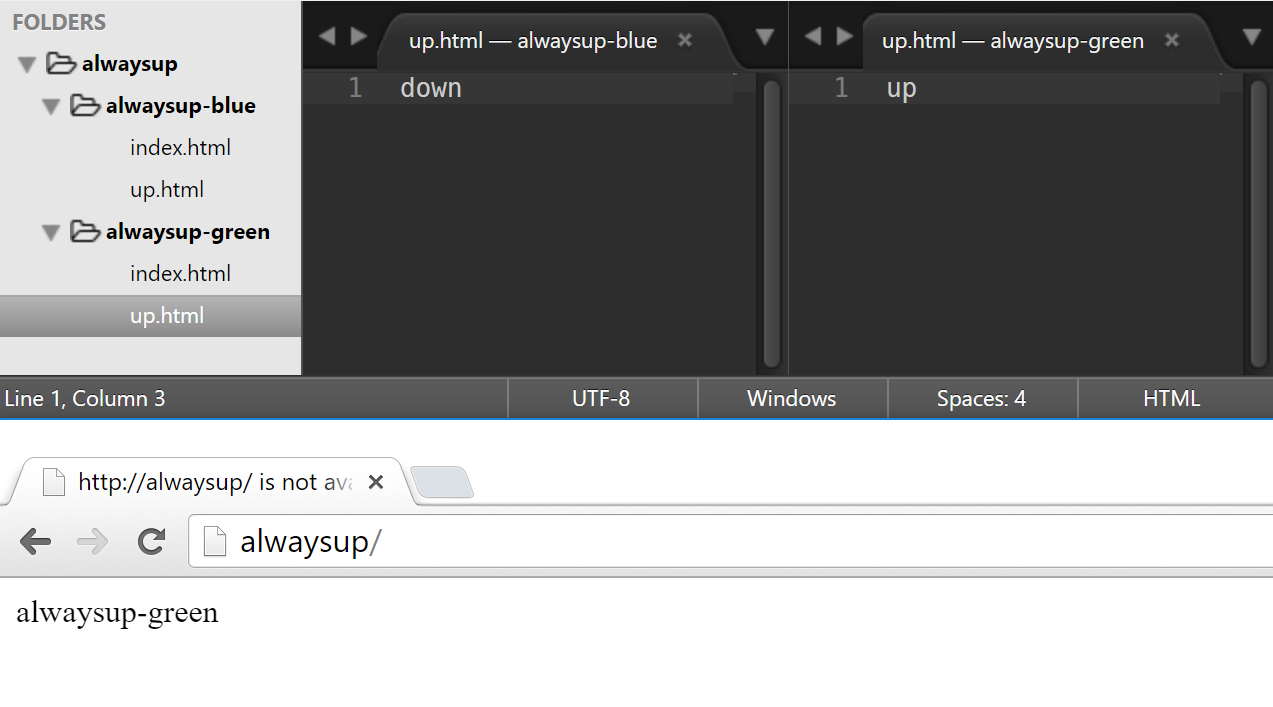 At this point any deployment strategy could be used to deploy to a site in IIS, except now it is necessary to check which site is down and deploy to that one instead of the one that is up. Deployment can happen via WebDeploy/msdeploy, FTP, Dropbox (yes - some people deploy with Dropbox), an Octopus Deploy Tentacle, etc. After new code has been deployed to the site that is down, the down site needs to be warmed up before its health check can be changed to a passing state. To do this, make a request to the site manually. In this example, a request would be made to http://alwaysup-blue:8001 to initiate a warm up in IIS. Then edit the health check file to make it pass the health check by changing down to up. Then once the server’s health status is “Healthy”, the initial site that was up can safely be brought down. All of this is done without introducing any downtime.

No more 4:30am deployments!

Doing all of this manually can be tedious, and should be automated so that steps aren’t accidentally skipped or done incorrectly. Here are some PowerShell snippets to achieve what was done manually in this example.

Check which site is unhealthy and ready for deployment

The quickest way would be to check the contents of the up.html file with Get-Content, essentially mimicking the health check in the IIS Server Farm.

We can also check the status of the Server Farm itself in IIS through Microsoft.Web.Administration.ServerManager.

First define a function to return a Server Farm by name.

Then get the isHealthy status from the ARR counters.

At this point use whetever deployment method necessary to deploy to the site that is down.

Warming up after deployment

I’m still trying to figure out how best to warm up a site without setting a timeout, but the idea so far has been to Invoke-WebRequest to the down site until a response comes back within a short enough time period.

To disallow new connections on the server that is up before bringing it down, we can call the SetState method with the following values.

After setting the state to Drain it would be possible to loop until the server has 0 connections, then make health check fail and make the server “Available” and “Unhealthy” - ready for the next deployment.

If SSL needs to be terminated in IIS it will now have to be done at the Server Farm. To do this a new URL Rewrite rule has to be created to match port 443. Make sure that the certificate to be used is bound to at least 1 site in IIS, or use IIS’s centralized certificates.

When ARR terminates SSL it will add a server variable of HTTP_X_ARR_SSL. Checking this server variable is useful for preventing redirect loops in applications that need to do HTTPS redirection.

Other things to consider